Pirates versus Ninjas? (in Off-topic)

Maybe we could have an official Poll?

Me, I'm going Pirate on a straight up fight, Ninja if you're allowed to sneak into your opponents home and murder them while they sleep. ;)

So happy to know i wasnt the only one watching that show :P
love the episode when Spartans beat ninjas LOL

but for the topic... i'd go for pirates, cause they have guns

Ninjas are cooler, because they don't have guns.

A ninja wouldn't fight you "Straight up" if he knew he couldn't win...

Deadliest Warrior was a fun show, but a few "players" were a bit misrepresented.

Ninjas fight till the death, against all odds. Or at least, thats the way I see it.

Pirate has a gun.

Ninjas train all their life for a single mission. They eat well, they exercise, they practice all the time, nothing else. With all kinds of weapons, ready for all kinds of situations.

Pirates...drink. They mostly fight against other brain-dead pirates. They rely on guns, cannons and their ships to win.

In a fight, a ninja will win 100% of the time, but only if the pirate does not have a gun :P Even then, chances are he will be drunk, or slowed down by a hangover/his beer gut. He'll miss!

Now, a pirate crew vs a ninja crew fighting aboard their respective ships...pirates win.

Ninja "crews" have ships? Pirates can stretch really far and hold a sword in their mo..

Pirates were more often than not trained by their respective countries navies, they were professional soldiers who turned to piracy when wars ended. And they always have a gun, usually 4-6 guns. :)

Well, I don't see why ninjas couldn't get themselves a ship. The samurai had ships, merchants had ships. Now, they probably wouldn't be able to dock in any large city...

"Pirates were more often than not trained by their respective countries navies, they were professional soldiers who turned to piracy when wars ended."

A ninja would just be in the shadows outside of a pub and ... gameover.

Correction: A ninja IS the shadows outside a pub.

Pirates wear eye patches so they can see well once below deck. They know the shadows well.

Pirates will change Ninjas to drinking game, and Ninjas will accept.

Unfortunately most Ninjas are lightweights, and will probably be drunk and embarrassed... to death.

Pirates have to be observant when discerning lies, weather, and black sand from gunpowder.

Ninjas kill themselves to keep the operation a secret...
Pirates makes as much noise as possible with cannon and drunking yelling tavern style.
If in a chase a ninja get his foot stuck in a hole, he will cut his leg not to be capture, whila a pirate being chased will turn his ship around (pirates are in ships right? and ninja are on land.. so they never meet anyway..haha) and confront the ennemy.


Thats why i prefer pirate style way of life !

Pirates are generally drunk and are associated with pure id. Win.

"Pirates have to be observant when discerning lies, weather, and black sand from gunpowder."

"Pirates will challenge Ninjas to drinking game, and Ninjas will accept.

Unfortunately most Ninjas are lightweights, and will probably be drunk and embarrassed... to death."

Not quite so if it is a smart ninja he will challenge the pirate and poison his drink thereby winning by what most Pirates would consider passing out by being a lightweight....hahahahaha

"Pirates were more often than not trained by their respective countries navies, they were professional soldiers who turned to piracy when wars ended. And they always have a gun, usually 4-6 guns."

Guns are for wimps! What good is a gun when you have a poison dart in your neck and you do not know where it came from! Dead Pirate walking....plunk....errr well Dead Pirate!

What good is a poison dart when you have a bullet in your head?

next tourney pirate vs ninjas lolz

Ninjas are infiltration units with a multitude of philosophies. Political assassinations weren't too common. Spying and castle penetration mainly. No feudal wealth management to speak of. Disposable scouts and human weapons taking years to forge with fewest alliances or support beyond their benefactor. Only two centuries of history by my knowledge.

Pirates are the ever-breathing, or breeding, thieves of the sea. Get rich or die trying. Vikings without the armor and greater appreciation for raiding tactics. Thievery in the light of pubs and shadows of the streets. Turning the tide for entire ports. All it takes to make a soldier is a gun and a promise of gold from a captain. Their history exceeds well beyond a millennia and still stealing.

Both can often be seen as underworld criminals, firestarting mercs, and down right evil persons. Though in all fairness real ninjas did serve their county/country and were less inclined to murder than pop culture would lead. Despite all that magic and myth which comes to mind when describing either. Ninjas are covert paramilitary, pirates are sea-born guerilla armies. Nothing superhuman/stereotypical about either. The shinobi are gone leaving their art to be taken in by modern military, but there will always be pirates. They don't die they multiple!

Other way to sum up the comparisons...
Ninjas vs Pirates = Protoss vs Zerg!

Hmmm not a bad summation there Gun except correct me if I am wrong but don't the pirates today pale in comparison by a long shot to the Pirates of yesteryear? The True Pirates are gone now there is only stale and pale carbon copies. The Ninja's of Today though have gotten tougher and meaner and are now actually a part of our military and Secret Services.

For America you have Delta Squad, Recon Rangers, Solo Special Forces, SEALS, Pathfinders separated from the Military you have other equivalents CIA, FBI, NSA and Secret Agents who are undercover field operatives etc etc Im not sure about all the other countries but I know they have equivalents as well.

I will take one of the now Ninjas any day over the now Pirates, same for back in the days the Ninjas were a better trained more disciplined group of elite fighters than Pirates were. There are a few exceptions but those are few and far between.

Conclusion Pirates are Tough, Ninjas Pwn their Faces with knives in their back before they can get their guns :P!

A pirate has no back, he simply has two fronts. Both fronts have guns.

Oh yeah? Space Pirates. Are there space ninjas? No! Game over.

I think a samurai would win.

Ninjas wouldn't be seen. They would kill pirates from the shadows with poisoned darts and throwing stars.

"Ninjas vs Pirates = Protoss vs Zerg!"

Nah. A correct comparison would be:

Pirates get drunk, rich and the girl. Sometimes more than one.

While ninjas get idolised by 14 year old boys in black ski masks and socks, creeping around the house in the dark wishing they owned throwing stars.

"I think a samurai would win."

When the Samurai first encountered Portugese Pirates (iirc I'll see if I can dig out any information), the Pirates wiped the floor with the Samurai.

The Samurai couldn't adapt to the guns and the diss honourable fighting of the Pirates. ;)

Didn't the best protoss player in the world, wipe the floor with the best zerg player?? Back in like World Cyber Games 2003?

A modern day ninja (assassin) would be a special ops sniper... and we all know how sniper vs pirate turned out...

Double post, but I think I read somewhere that the sniper after the shot stood up and someone said "wow nice shot" and he replied, "I'm a ninja" 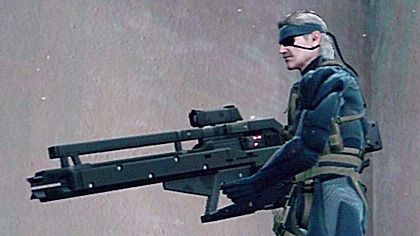 Oh well, you guys all tried very hard, but sometimes effort is not enough.

I'd also like to say that Solid Snake is the missing link between pirate and ninja.

The picture you provided is solid, scientific proof of that. No one with a working brain could argue with your conclusion, Professor Tensei.

Korean e-Sports Players Association for Starcraft top 10 ranks:
Zerg,Protoss,Terran,Terran,Zerg,Terran,Zerg,Zerg,Protoss,Zerg
WCG wins over the years:4xTerran,3xZerg,2xProtoss, and the '03 winner was Zerg.
"I used to think that defeating the Zerg would take precise military maneuvers, clever tactics and strong leadership. I was wrong. You can't out-think the swarm, you can't out-maneuver the swarm, and you certainly can't break the morale of the swarm. I hate to admit this, but I could do my job just as well if I ordered all my men to simply shoot anything that moves." Terran
Catch the fever!
This bickering needs some grey. Snipers are more like today's longbowman. If the special forces sniper is today's ninja, then....

We be rollin', haters.

He simply didn't want to reveal his true pirate identity.

No one can *successfully* impersonate a ninja... no one...

"Double post, but I think I read somewhere that the sniper after the shot stood up and someone said "wow nice shot" and he replied, "I'm a ninja""

Believe you have committed seppuku.

Except Solid Snake is not "just" a sniper. That's like saying the World.... of Warcraft is "just" a game, and not a way of obese life.

Ninja in a straight up fight with Pirate is unfair; that's not what they're trained for.

I would say if both parties are caught off-guard, ninja wins with the better reflexes and glass egg / shuriken, simply because a pirate won't shoot when he's got an inch of steel or shards of glass in his eye.

They are the snipers of today, only that these snipers are never found.

Pirates would be sitting ducks when they are attacked, whether they are poisoned while sleeping or killed by poison darts/shurikens when drunk. Guns don't do anything against somebody you never see, and ninjas would be sure they would win if they attacked.

Pirates are on a boat.

This thread is closed to new posts. However, you are welcome to reference it from a new thread; link this with the html <a href="/bboard/q-and-a-fetch-msg.tcl?msg_id=002sTU">Pirates versus Ninjas?</a>